The impact of light, contrast and magnification

The effects of age

As we age, it is a natural development that the ocular media become more cloudy. As a result, our eyes require more light and our vision deteriorates – slowly at first but then increasingly faster. This can be attributed to the ageing of eye tissue, but also to degenerative eye diseases such as age-related macular degeneration. As a result, a sixty-year old man may require 15 times more light for the same visual task (e.g. reading) than a ten-year old boy in order to experience the same level of comfort and effectiveness.

Consequently, it is recommended to increase contrast if possible. For instance, by:

Studies have shown that increasing the brightness from a low or medium level to a high level will improve the speed and accuracy with which objects are recognised. As mentioned before, illumination plays a major role as we age since our lighting requirements change over time. The necessary amount of light usually increases proportionally to the speed with which the visual information is presented, and decreases as object sizes increase.
Visually impaired people are often insufficiently informed about their disability and rehabilitation options and thus do not consult an ophthalmologist or eye care professional until the late stages of eye disease. However, since their visual acuity is not yet significantly reduced during the early stages of their eye disease, visually impaired patients can improve their vision by selecting the light temperature that suits them best. Age-related macular degeneration is a leading cause of low vision. Cataract also results in reduced acuity that creates difficulties for patients. Early cataract surgery nowadays rehabilitates the patient’s vision in many cases.

The impact of light temperature on contrast sensitivity

Light plays a major role in low vision care. Finding the best light temperature for the individual is important when selecting an appropriate light. With the proper light temperature, patients can considerably reduce the magnification power required. Individually selected lighting can also significantly improve the visual performance of patients who require normal reading glasses. In addition to improving visual performance, light influences people‘s active behaviour, concentration and psyche positively.
The colour or light temperature is the colour of the light produced by a light source. The lower the kelvin degree of the colour temperature, the higher the portion of red. The higher the temperature, the bluer the light.

Colour temperature is expressed in degrees kelvin. Although white light is a mixture of colours, not all shades of white are the same since the constituent colours vary. Consequently, white light with a higher proportion of red will appear warmer and white light with a higher proportion of blue will appear cooler.
In order to classify the different shades of white light, the concept of colour temperature is applied. The colour temperature of a light source is the temperature of a black-body radiator that radiates light of comparable hue to that of the light source. This concept can be best explained with the help of common thermal radiators such as the tungsten filament of an incandescent bulb. When these materials are heated to a temperature of 1000 K, they glow red. At 2000-3000 K, they will look warm white, at 4.000 K neutral white, and at 5000-7000 K cool white.

In other words: The higher the colour temperature, the cooler the perceived colour of the white light!

It is recommended to use a warm white light temperature for visual impairments caused by hazy or cloudy ocular media (cornea, lens, vitreous humour). Otherwise, the fine particles causing the hazy vision would scatter the portion of short blue waves in the light, resulting in irradiation and consequently reducing contrast and increasing glare.
Disorders of the retinal photoreceptor cells (e.g. retinitis pigmentosa) are classified as metabolic disorders. Waste products from photoreceptor cells are no longer removed and accumulate in the peripheral areas. This metabolic waste has fluorescent properties. Light with a high portion of UV or blue light makes this waste shine. To prevent the resulting halos and glare effects, light sources with a high portion of red waves, or rather warm white light temperatures, should be used for reading in addition to UV and blue blocking filter lenses.
Visually impaired people with macular conditions require significantly more light. Since they usually perceive light with a high portion of blue waves to be subjectively brighter than warm white light temperatures, it is recommended to use cool white or daylight white light temperatures.

Further information on product solutions for visually impaired people is provided at www.improvision-lvs.com.

Courtesy of
A. SCHWEIZER GmbH 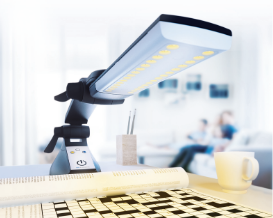 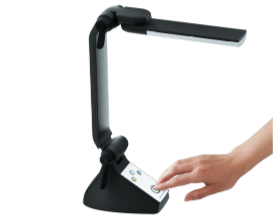 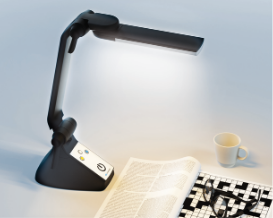